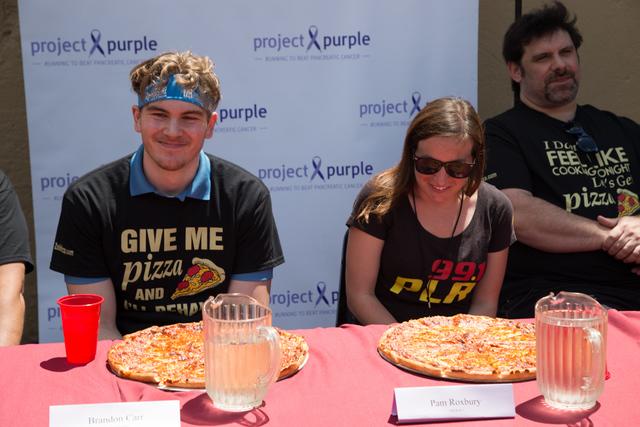 This year, Zoi's Pizza decided to hold a pizza eating competition in light of pancreatic cancer awareness. They planned the event after watching the Treehouse's own Brandon Carr devour a large pizza within a timed session after losing a sports bet. Zoi's was inspired by Brandon's ability to quickly finish the pizza and turned it into a successful charity event assisting Project Purple in the fight against Pancreatic Cancer.

The Treehouse held a practice round for Brandon, as he continued to train and shave minutes off his time. The practice round took place on Wednesday, June 10, and almost everyone from the company attended. The actual event took place on Wednesday June 24 at 12 pm, where the Treehouse continued to cheer Brandon on, making the trip to Zoi's to watch him compete.

Brandon competed among eleven other contestants, with his best time being 3:57 up until that moment. Each contestant had to raise $250 towards the pancreatic cancer fundraiser for Project Purple in order to take part in the event. The competition consisted of local radio station 99.1 PLR's Pam Roxbury, professional eater 'Gentleman Joe' and other eager contestants. The event took place outside and each participant had to follow a strict set of rules that was embodied around the simple goal of consuming a large cheese pizza as fast as you can.

Brandon finished in second place after professional competitive eater Gentleman Joe. Joe finished in 2:25 and Brandon shortly after that with a time of 3:37. This was an all-time record for Brandon. With that said, he and the rest of the Treehouse were extremely proud and happy to be a part of such a fun, supportive and creative event.

Back to Previous Page
Back to News & Events